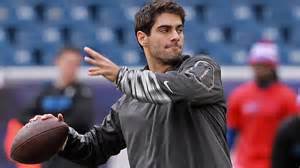 Jimmy Garoppolo: The Future Of The New England Patriots

With New England Patriots star quarterback Tom Brady suspended 4 games (whether he’s appealing the suspension has yet to be confirmed) due to the Deflate Gate fiasco, the opportunity has come for backup Jimmy Garoppolo.

Garoppolo, 23, was the 62nd pick of the 2014 NFL Draft, going in the 2nd round. Coming from Eastern Illinois, he broke school records held by Tony Romo, including single season TD passes, yards, and career TD passes.

This was the perfect backup to a future hall of fame legend in Brady.

However, the time has come for Jimmy G to stand up to the challenge as the likely future of the Patriots franchise.

So while some Patriots fans are too busy getting arrested, the rest of Foxboro is probably wondering what they have in store with Jimmy Garoppolo as the starter. Quite a bit as it turns out.

In the 2014 preseason, Garoppolo showcased his playing style to a wide audience. Like Brady, he lacks the smooth mobility and scrambling mechanics of guys such as Aaron Rodgers and Russell Wilson, but he’s able to escape multiple defenders a la Tony Romo, side step pressure with a quick release a la Peyton Manning, and has the gunslinger mentality of Andrew Luck.

As the film shows us, it’s quite impressive how accurate some of his deep passes are. These are throws I haven’t seen Brady make.

Take, for example, Garoppolo’s preseason game against the Redskins. 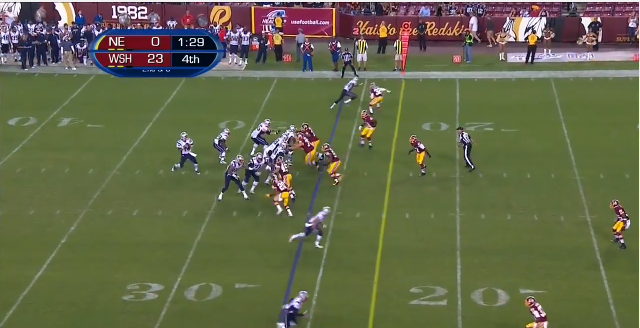 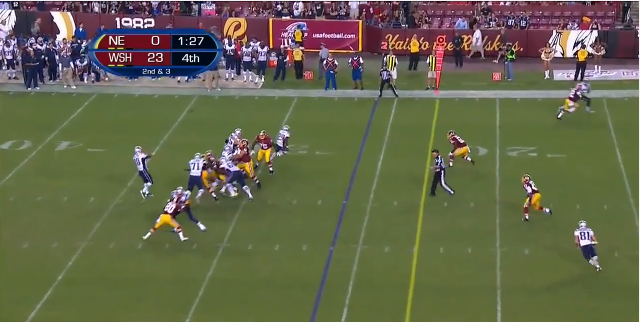 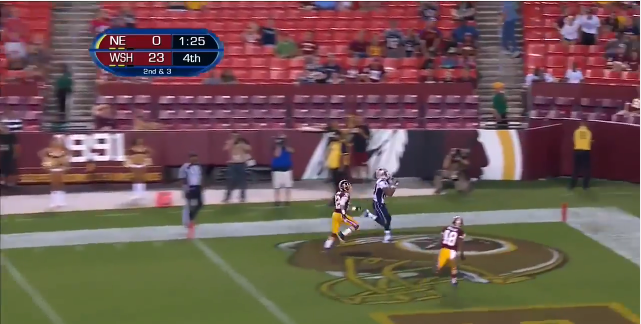 Late in the 4th quarter, Jimmy noticed tight end Brian Tyms gaining separation on a defender, and fired a beautiful pass in the end zone for the touchdown. What’s great about this is that Garoppolo didn’t force Tyms to try and make a play on a 50/50 ball, but instead led him towards the end zone, a sign of a great deep ball passer.

Another impressive aspect of Jimmy is his play under pressure; he can allude multiple defenders and avoid sacks. for example his game against the Giants.

In the 3rd quarter, with pressure coming, it looked like Garoppolo was going to take a sack, but somehow escaped and threw the ball away. It may seem unimpressive, but that’s key when you have a young quarterback that knows when to throw the ball away.

Generally, the pass protection has been good, but Garoppolo on occasion knows how to make his offensive line better, able to side step defenders and climb up in the pocket.

I already mentioned the comparisons to fellow Eastern Illinois alumni Tony Romo, as well as Peyton Manning, but what about legacy? It should be pretty obvious at this point; guys like Steve Young, Aaron Rodgers, and Philip Rivers. In other words, QBs that sat behind future hall of famers such as Joe Montana, Brett Favre, and Drew Brees. Young, Rodgers, and Rivers became some of the best QBs in their respective eras, and Garoppolo has a chance to enter the same realm.

While it may seem foolsh to compare Garoppolo to any QB on this list already, there’s one man that may disagree; Bill Belichick. The 4x Super Bowl winning coach has perhaps the best offensive system in the NFL today, and was a key component in the development of Brady.

Futhermore, the Patriots are a team that’s never needed to worry about the pass game losing momentum, as they can win games in a wide variety of ways on both sides of the ball. Hell, Belichick guided the 2008 Patriots to 11-5 with Matt Cassel, and while it’s true that team had more talent than the upcoming 2015 squad, I don’t see the Jets, Dolphins, or Bills taking control of the AFC East unless the quarterback play improves.

For Garoppolo, he belongs to a very QB friendly system with receivers and tight ends that can get yards after the catch, and he’s behind good pass protection as well, which is very important when you’re developing a young quarterback (moreso to his legacy).

The Steelers will be without All-Pro runningback Le’Veon Bell, and while I don’t doubt the abilities of Ben Roethlisberger, the same cannot be said for the inexperienced defensive secondary, though the front 7 has some promise with the drafting of outside linebacker Bud Dupree.

The Jaguars game is in Foxboro, which is a no brainer in of itself. The roster is filled with young talent on both sides of the field, but there hasn’t been any proof that they can scare you (at least not yet).

The Cowboys might seem like the Patriots’ biggest threat, but the home field advantage is a bit lacking in comparison to other top teams. The sustainable defense from 2014 might struggle against the Pats pass game, and Tony Romo has been known to have the occassionally awful home game (2014 week 1 against the 49ers). Coincidentally, both Garoppolo and Romo went to Eastern Illinois. Still, thanks to the Cowboys offense and pass protection, this is a game that could go any way.

There are 2 things that have made Tom Brady work out in New England; his mentally sharp focus, and his work ethic. Garoppolo bears some similarties, but he also has a bit of Romo, Rodgers, Roethlisberger, and Peyton in him, in that he does an excellent job of escaping pressure, as well as a quick release. We can’t expect anything like Tom Brady’s 2007 right away, especially since Jimmy G is playing with a less talented roster.

However, we can expect that Jimmy Garoppolo can make the Patriots good enough to continue being contenders, or at least until Tom Brady comes back. But unlike 2008 Matt Cassel, this situation is a bit different. It’s unlikely that Garoppolo gets traded like Cassel did, as Brady is nearing retirement. In 2008, Brady was 31 years old, and it was obvious to us that he had several good/great years left in him.

Below is a chart of my active quarterback power rankings. Rookies rank at the bottom, as they haven’t played a snap in the NFL, and the ranking depends on the quality of play, the situation (sit. is the abbreviation), the health, the status, and the experience of the quarterback (hence the reason section=reason for the ranking).

If Garoppolo makes significant progress, and if Brady’s retiring anytime soon, we can expect his ranking to rise on this list.

Bottomline, this is Jimmy Garoppolo’s team now, after 14 years of the Brady/Belicheck era. It’s a new chapter, but it’s something fans of the defending Super Bowl Champs should look forward to seeing.