Welcome to the first “episode” of my series of articles called Narrative Killer, where I take a narrative people believe and destroy it with my own set of facts and research. Today, I tackle the idea that Seattle Seahawks quarterback Russell Wilson is nothing more than a game manager.

Since coming out of the 3rd round of the 2012 NFL draft, Wilson has done nothing but drive one of the best starts by a young quarterback in NFL history, helping Seattle earn their first Super Bowl ring and the city’s first title since 1979. Even so, this is a guy who has gotten blasted for his performance in the 2014 NFC Championship Game, as well as the game ending interception in Super Bowl.

That doesn’t sound right to me.

Throughout this article, I’ll throw out various narratives placed upon Wilson, countering with various charts and analysis through film and statistics, as listed below.

Narrative #1: “Russell Wilson Rides On The Back Of A Great Team.”

This is a popular statement often made by Russell Wilson’s biggest critics. For some reason, he’s not allowed to have a great team in his early years.

Which is funny, because that’s how Tom Brady and Ben Roethlisberger developed. In 2001, the New England Patriots had the 6th ranked defense in the NFL, while the 2004 Pittsburgh Steelers had the #1 ranked. Brady, Ben, and Wilson were all on Super Bowl winning teams in their sophomore years.

Not coincidentally, Wilson also has a little bit of both QBs in him. Like Brady, he’s a great late round success story that got great coaching and helped lead his team to 2 Super Bowls in his first 3 seasons as a starter. As with Roethlisberger, Wilson is a very skilled athlete that can buy time in the pocket, extend plays, and fire an excellent deep ball. In terms of athleticism, Wilson is an even better talent than Big Ben, able to make big plays out of nothing with his scrambling abilities.

But what about Marshawn Lynch? His “run through as many brick walls as possible” style of ground and pound has made him one of the most impressive runningbacks in NFL history, and he’s a valuable resource to Seattle’s offense. Surely not using him would hurt Seattle in the long run, right (well……..)?

Not so fast. Lynch certainly is a big factor in the run game, but so is Wilson. It doesn’t take a rocket scientist to recognize that in 2014, Russ used his legs 24/7, and that’s evident by his 849 rushing yards, 6 TD, and 7.2 yards per rush. In addition, there are 3 100-yard games in last year’s performance (Redskins, at Rams, Giants), and the performance against the Rams marked the first time in NFL history a QB passed for 300+ yards and rushed for 100+.

It’s not just QB runs Wilson uses his legs for. Often times, because of bad pass protection or lack of separation from his receivers, he had to scramble to buy time, and there were instances where he made screen passes spectacular plays. And we all know about his deep ball. Before 2014, Pro Football Focus had him with the 3rd best deep ball accuracy among quarterbacks since 2008 (behind Aaron Rodgers and Drew Brees). It’s a smaller sample size, but it’s impressive to see Wilson above peers such as Andrew Luck, Cam Newton, Colin Kaepernick, Andy Dalton, Ryan Tannehill, and Nick Foles.

I beg to differ. But what does being a top 10 active QB mean? How do you qualify for it? Consistency, mentally sharp focus, and big plays. A top 10 QB regularly makes big plays, few mistakes, and can advance the ball really well. That’s what makes Peyton Manning, Tom Brady, Drew Brees, and Aaron Rodgers so good. The other 6 guys are of similarly good decision making.

However, when I say “good decision making”, I’m not referring to managing a game, checking it down, dumping the ball off to a runningback, or screen passing without trying to stretch the pigskin down the field. That’s part of why Wilson is currently inside the top 10. He makes big plays more than he does mistakes, and at times his decision making is up there with the elites.

In terms of spotting, I would probably rank Wilson 8th at best. Others might have him a bit higher (critics would have him lower), but I think 8 is a perfect fit for now.

Narrative #3: “Russell Wilson Is Incapable Of Putting The Team On His Back.”

Interesting when Wilson’s critics say this, because since 2012 (his rookie year), he has the most game winning drives in the NFL with 15. 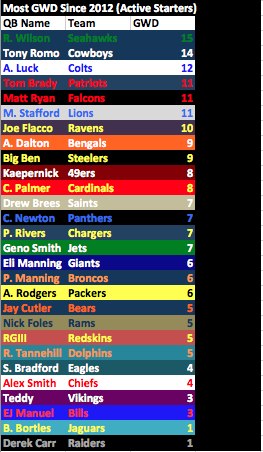 This is also the record for most game winning drives in a quarterback’s first 3 seasons. But I know what you’re thinking; “Did any of them require comebacks at all?” The answer to this puzzle is yes. Wilson has 10 4th quarter comebacks in his career. What’s funny is he has more game winning drives than a few established guys such as Aaron Rodgers have had in their entire careers.

(NOTE: If you’re wondering how one qualifies for a 4th quarter comeback/game winning drive, Football Outsiders’ assistant editor Scott Kacsmar, the creator of the modernized version, cites it as “[winning] the game (no ties or losses), [taking] the field with a 1–8 pt deficit (1–7 prior to 1994) and [scoring] as an offense (no fumble return TD to win the game). It does not have to be the final winning score (hence, that applies to the number of game-winning drives).” For further explanation, you can find Kacsmar’s extensive column on 4th quarter comebacks and game winning drives here.)

Of course, the next response is usually the following; “How much did Wilson contribute to his team’s comebacks and game winning drives?” I’m glad you asked, because that’s listed below. Each of Wilson’s 15 game winning drives have been charted.

GWD Yards=Amount of total yards (passing and rushing) Wilson contributed to the total amount of team yards on the game winning drive.

Trailed By= The most points the Seahawks trailed by entering the 4th quarter.

Won By=How much the Seahawks won by.

4Q/OT TD=The total amount of touchdowns Wilson threw or rushed in for. 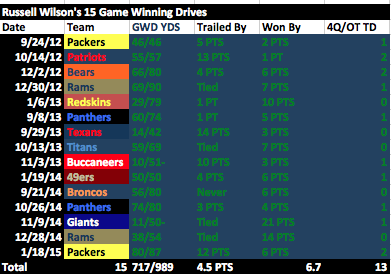 Russell Wilson contributed for 72.5% of his team’s total yards on game winning drives from 2012-2014, while earning a total of 13 touchdowns. Could a game manager do that? Doesn’t seem like it.

One more thing before we move on: In both NFC Championship Games Russell Wilson appeared in, he threw the game winning touchdown pass to Jermaine Kearse. Both touchdowns went 35 yards. Pretty cool, huh?

You’d think this would be more than enough evidence to suggest Wilson is not a game manager, but the next question would typically follow; “Where’s the context? Numbers can sometimes lie.” Indeed they can, which is why I decided to sit down and watch all 15 game winning drives for myself. My notes are listed below.

Game Winning Drive #1: Week 3 vs. Green Bay (9/24/2012): Wilson’s first of many game winning drives to come came in the Fail Mary game. What are the odds? Despite the extreme controversy from the final play, Wilson actually contributed to the comeback/game winning drive, staying patient, and making something out of nothing on a 12-yard run for a first down (7:18 4Q). He also threw a nice rocket pass to Sydney Rice for 22 yards (0:37 4Q) before firing 3 straight incomplete passes and you know what.

Game Winning Drive #2: Week 6 vs. New England (10/14/2012): The Seahawks trailed in the 4th quarter, but Wilson had to do more than just come back from a one possession game. This was a two possession score, as the Seahawks trailed by 13 points. Despite being a rookie, Wilson managed to carry the team on his back in the 4th quarter, throwing 2 touchdown passes, the 2nd of which was a beautiful game winning rainbow to Sydney Rice for 46 yards (1:18 4Q). It includes a perfect bomb to Golden Tate for 51 yards (9:08 4Q).

Game Winning Drive #3: Week 13 at Chicago (12/2/2012): Like the previous week, Wilson threw 2 TD passes in the 4th quarter/OT, and like before, did it in thrilling walkoff fashion. Highlights include a 1st down scramble before the 2 minute warning, finding Sydney Rice while running outside the pocket for 27 yards (0:37 4Q), and an on target pass to Golden Tate for the game winning 13 yard touchdown in overtime.

Game Winning Drive #5: Wild Card Round at Washington (1/6/2013): Nothing special really. Wilson managed an easy throw to Zach Miller after staying patient in the pocket (8:05 4Q). However, he managed to give Marshawn Lynch a block on Beast Mode’s go-ahead TD score.

Game Winning Drive #6: Week 1 at Carolina (9/8/2013): Most of this game was a tight defensive stronghold, and then the Seahawks finally broke loose in the 4th quarter. Wilson did wonders on the game winning drive, throwing a beautiful 43-yard bomb to Jermaine Kearse for the game-winning touchdown (10:13 4Q). On the previous play, he threw another beautiful pass, but that was dropped (10:21 4Q).

Game Winning Drive #8: Week 6 vs. Tennessee (10/13/2013): Another game where Wilson’s presence was needed. Highlights include extending the play before throwing across his body to an open Marshawn Lynch for a 55-yard play (14:47 4Q) and a dime to Sydney Rice for 24 yards (8:00 4Q). One play that won’t go on the stat sheet: Wilson recovered a fumble from Lynch just before the go ahead touchdown. Heads up play,

Game Winning Drive #12: Week 8 at Carolina (10/26/2014): Like the first Carolina comeback game, this was mostly a defensive stronghold before Russell Wilson and company broke through, ending with Russ throwing a beautiful game winning 23-yard touchdown to Luke Willson (0:47 4Q).

Game Winning Drive #15: NFC Championship Game vs. Green Bay (1/18/2014): By far one of Wilson’s worst games ever, at least through the first 3 quarters. But this remains Wilson’s finest comeback/game winning drive in my mind. As he slowly brought his team up from his costly turnovers and decision making, Wilson led a comeback from down 12 points to send the game into overtime. The last 2 plays of the game were both beautiful 35-yard bombs to Doug Baldwin (12:36 4Q) and Jermaine Kearse for the game-winning touchdown (11:47 OT).

Russell Wilson is so much more than a game manager. The quarterback position is the most important on an NFL roster, and without a good QB, sustained success is unlikely. That’s why Wilson’s 3rd round success should be celebrated. He’s also one of the most impressive athletes I’ve ever seen play the game.

Lest we forget, he also played a hell of a game in the Super Bowl before that interception on the 1-yard line, single handedly driving the Seahawks into enemy territory, as well as dominating on the deep ball in perhaps his finest playoff game. But all we’ll remember is the interception to Malcolm Butler, that is, unless the Seahawks win another Super Bowl with Wilson as the MVP.

Truth be told, Wilson shouldn’t have anything left to prove. As a 3rd round pick destined to sit on the bench in his rookie season, his preseason play elevated him to the Seahawks starting QB position, a role he has continued to excel in since. And 3rd round quarterbacks shouldn’t be able to put up one of the best rookie seasons in NFL history, or have MVP caliber seasons like he did in 2013. 3rd round picks should not have impressive skill sets period.

And yet, Russell Wilson has managed to transcend all expectations, becoming one of the league’s top quarterbacks, as well as the Seattle Seahawks’ ace in the hole.