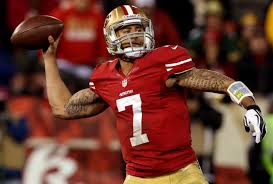 There’s a certain quarterback out there that’s been constantly getting bashed despite clearly having solid arm strength, a bold personality, a Super Bowl appearance, and excellent postseason criteria.

You might be thinking that the QB I’m referring to is Joe Flacco. It’s not. I’m really referring to Colin Kaepernick.

Yes, Colin Kaepernick, entering his 5th season in the NFL, is one of those “love or hate” players. People who love him usually point out his incredible ability to throw Randy Johnson-esque fastballs 20-30 yards across the field, as well as highlight his experience as a dynamic runner. Those who hate him cite his inability to make multiple reads and downright-at-times bad accuracy. I agree with both sides.

With that said, here’s my case; I think Colin Kaepernick is a really good postseason quarterback on the same level as active guys such as recently crowned playoff god Joe Flacco. Naturally, however, I’m not satisfied with simply saying it, and watched the film of all 6 of Kaepernick’s playoff games. What I discovered is listed below.

The Raw Statistics Are Extremely Misleading

Let’s get this out of the way quickly. I’m sure a lot of you are pointing to the box score for Colin Kaepernick’s postseason stats. And it’s true, his raw stats do not look like anything a great postseason quarterback would put up. He’s 94 of 162 (58.02 CMP%) for 1,374 yards, 7 TD, 5 INT, and an 87.3 passer rating in his 6 career playoff games. 7 touchdowns in 6 games? 5 interceptions as well? What’s so great about that.

Well, there’s something you should know; Never write off a quarterback’s performance based on the results displayed in the box score. But before I get to what Kaepernick did in the eye test, take a look at the below chart.

This is a chart of the highest average postseason QBR since 2010 (Note that guys like Tony Romo, Philip Rivers, Alex Smith, Jay Cutler, and Cam Newton all have less than 4 games of postseason play in the 2010s’, and therefore cannot qualify for this list.). Surprised? Yes, Kaepernick has been highly regarded by ESPN’s QBR statistic, and the same can be said as well for Aaron Rodgers and Eli Manning (the latter of which is still hanging on that 2011 postseason run). Don’t even get me started on whatever Andy Dalton’s been doing.

To be ahead of guys like Joe Flacco, Aaron Rodgers, and Tom Brady in average postseason QBR since 2010 would be extremely impressive, and that’s precisely what Colin Kaepernick has done. 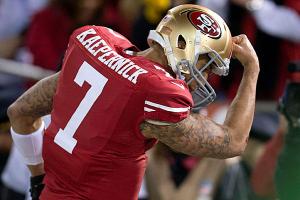 It’s obvious that Kaepernick’s dual threat ability is reminiscent of Steve Young (though not as efficient). Speaking of, Young has the record for most rushing yards in the postseason by a quarterback in NFL history (594). Guess who’s 2nd with 507 yards? Colin Kaepernick.

And there’s one key difference as well; Kaepernick’s done it in less games.

It might sound ridiculous to compare Kaepernick to a HOF QB like Young who was clearly far better in his era, but when it comes to postseason rushing stats, there’s a bit that can be compared. Even if we only include the games Young started in, that’s still 516 yards in 14 games, or 36.9 yards per game, well short of Kaepernick’s 84.5. Insane start.

Kaepernick also holds the record for most rushing yards by a quarterback in a single postseason game, and it should be obvious that it’s the 2012 NFC Divisional matchup against the Packers, where Kap ran for 181 yards and 2 touchdowns. He’s also one of 6 quarterbacks to make the Super Bowl in his sophomore year (Dan Marino, Kurt Warner, Tom Brady, and Ben Roethlisberger accomplished this before him, and Russell Wilson accomplished this after).

Not bad for a QB many considered overhyped by Ron Jaworski.

Colin Kaepernick Passes The Eye Test In The Postseason 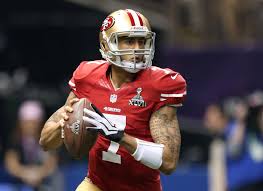 There’s no sugarcoating here; I think Colin Kaepernick has had some of the greatest postseason performances in recent memory, and all 6 of his games have been quality. No bad games here.

It’s often said that the playoffs are all about big plays, and Kaepernick has made plenty of them during his time come January. In fact, I took the liberty of watching each postseason game. Below are the notes I took on each game.

2012 Divisional Round Vs. Green Bay: While he started off ugly with a bad throw resulting in a Sam Shields pick six, Kaepernick put that completely behind him in one of the greatest postseason performances of the decade. With a sustained balance of scrambling and firing high velocity passes, consistently making good decisions and making some excellent throws, such as the one to Vernon Davis for 44 yards (1:26 3Q). In addition, Kap was an insane 7/11 on 3rd down conversions.

And yes, who could forget the 56-yard touchdown run? Excellent playoff debut.

2012 NFC Championship at Atlanta: This game was a perfect summary of Kaepernick in general: He doesn’t always connect, but when he does, he makes it look perfect, such as the pass to Vernon Davis on the left side for 31 yards (7:33 3Q). His fastball pass to Walker (12:10 3Q) was also a beauty. Overall, while the gaudy rushing stats were missing, Kaepernick again played an insanely sharp game, staying on target while avoiding big mistakes. Another solid performance.

2012 Super Bowl Against Baltimore: 5 yards away from giving the 49ers their 6th Super Bowl and capping off (no pun intended) an incredible 11-game run from Kaepernick. Despite throwing a pick late in the first half, Kap was impressively sharp in the 2nd half, where he lead a near comeback from a 28-6 deficit. His pass to Moss for 32 yards was beautiful (11:54 4Q), as was his fastball to Walker (1:06 2Q). This was a perfect example of Kap showcasing his outstanding arm strength, and he picked apart the Ravens defense in crunchtime before a goal-line stand ended the 49ers’ Super Bowl hopes. Nevertheless, Kaepernick led a valiant comeback effort, and an overall very good performance.

2013 Wild Card Round at Green Bay: It seems like the Packers and 49ers always meet in the playoffs. After all, that’s what happened when Steve Young and Brett Favre were both on the field. And it seems like Kaepernick always plays really well against Green Bay. Such is the case here, where Kap once again showcased his scrambling abilities (4:16 2Q, 11:07 4Q, 1:07 4Q) and made impressive throws when it mattered, such as threading the needle to Davis for a 28-yard touchdown (10:32 4Q), or his deep pass to Crabtree for 31 yards (9:59 1Q). Another excellent job of picking apart the Packers defense. 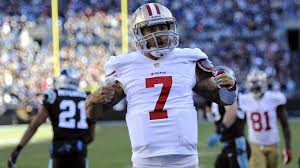 2014 NFC Championship Game at Seattle: Another game where the raw stats do not do Kaepernick any justice. Sure, he threw 2 picks in the 4th quarter (his first one was abysmal), but he played a very strong first 3 quarters, constantly extending the play (13:08 2Q, 12:15 2Q, 6:30 3Q), as well as making the big-time throws (8:26 3Q, 13:30 3Q, 0:59 4Q). His 4th quarter performance was a mixed bag, but at least he was able to lead the 49ers inside the red zone on the final drive, which included a game saving throw across his body to Gore on 4th and 2 for 17 yards (1:54 4Q). And besides, this is the LOB we’re talking about. Kaepernick looked very impressive against the #1 defense for the most part, and it’s unfortunate it had to end in an interception in the end zone. 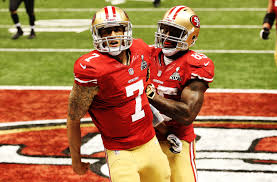 What I am saying is that Kaepernick is very underrated when it comes to the postseason. After taking a long look at the film, I think his performances are up there with the likes of Joe Flacco, Aaron Rodgers, Eli Manning, or Tom Brady as far as the 2010s’. So while some 49ers fans continue complaining about bringing Alex Smith back, they should appreciate what Kaepernick has done for them come the postseason.

Perhaps it’s his personality that makes him an easy target, but for whatever reason, people just forget the excellent postseason performances or remain completely unaware of them. A guy like Kap gets bashed and criticized for not winning a Super Bowl, while a “winner” like Alex Smith gets a free pass for not taking San Francisco as far as Kaepernick did, and with less impressive results and style to boot.

There are enough guys that I would take in the playoffs to prevent Kaepernick from being considered a guy I would want to lead me to the playoffs. However, based on performance alone, he is indeed top 5. And to quote Ron Jaworski, I truly believe Colin Kaepernick has put up some of the greatest playoff performances in recent memory.

Who knows if Kaepernick can improve his flaws or get his team back to the playoffs? What should be obvious is that, for a time, during an era, he was one of the best active quarterbacks in the postseason.