WARNING: Do Not Have Your Runningback Lead A Season In Rushing Attempts

One of the most important positions in the game of football is the running back position. Along with the pass game, it’s one of the 2 positions that advances the ball in an offense. The dependency placed on a  running back varies from team to team, but over the years, we’ve seen various running backs decline based on production or injury.

Fascinated by this topic, I wondered if a correlation existed between run heavy offenses and health issues. Surely enough, I found one; running backs leading a single season in yards per attempt. Dallas Cowboys runningback DeMarco Murray is the latest running back to lead a season in touches, with 392 touches in 2014 on his way to a terrific season, earning first team all pro honors.

However, this is NOT a list DeMarco would want to be on, as explained in the chart below.

Notice some familiar faces on this list? 2005 MVP Shaun Alexander suffered the decline phase after leading the league in touches (though theorists will say the Madden Curse claimed him). Larry Johnson was quite good in 2005 and 2006, the latter year he actually claimed the single season record for carries. With a decline in production and efficiency, the nail in the coffin was a foot injury in week 9 that sidelined him for the rest of the year, and was never the same since.

Eric Dickerson and Emmitt Smith are obviously a few outliers, but guys like Barry Foster and Gerald Riggs had their careers cut short after leading the league in touches. Arian Foster is still a quality running back, but injuries have kept him sidelined for the last 2 years. We all know about the fall of Chris Johnson by now, and new Bills running back LeSean McCoy suffered a notable decline in production despite being behind Pro Football Focus’ #1 graded run block in Philadelphia.

The scariest decline is Eddie George, who had app 3.0 yards per carry, one of the lowest YPC with a minimum of 300 touches in a season ever. Jamal Anderson didn’t even come close to getting a third of the touches he had in 1998, as a torn ACL cut his season short in 1999.

The way a leading season in touches can affect a running back also varies. As further explained in the chart below, the results…do not look positive. 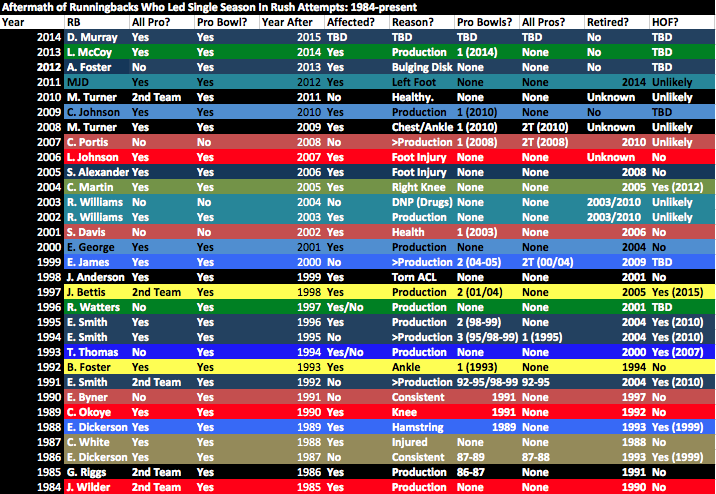 Is it fair to say that leading a year in touches will always contribute to a decline? Not necessarily. Guys like Clinton Portis and Edgerin James actually performed better the season after.

However, looking at the above chart says that doesn’t happen too often. In fact, more often times than not, a running back has experienced decline in production after leading a season in touches. The reason for the decline has varied since 1984, with a wide variety of injuries, or just a simple decline in production. While some may attribute guys like Jamal Anderson and Curtis Martin declining due to age, the success of “older” running backs such as Frank Gore and Marshawn Lynch make me skeptical if that statement is even accurate.

In most cases, these guys barely ever play at an All-Pro level, or even a Pro Bowl level again. I know, I know, the Pro Bowl voting is a joke now, but there was a time where it used to not suck.

Here’s a closer look at all of the teams since 1984 that had a running back lead a single season in touches.

The Falcons and Cowboys are the biggest repeat offenders, while the Redskins have come awfully close. At least Dallas had Smith leading 3 highly productive seasons leading the league in touches. The Falcons had Gerald Riggs and Jamal Anderson experience declines in production before their 15 minutes were up. Portis was the only guy to actually get better for the Redskins. Byner stayed somewhat consistent in his following 1991 season, but Stephen Davis’ health contributed to a decline in his production before being sent to Carolina in 2003, where he had a great comeback season, helping the Panthers reach the Super Bowl.

The Bears, Giants, Browns, Raiders, Patriots, Ravens, Bengals, Cardinals, Saints, Broncos, Packers, Vikings, Lions, Chargers, Rams, and 49ers are the 16 teams that have not had a running back lead a season in touches since 1984. The AFC South is the only division to have all 4 teams at one point do this. The NFC North is the only division to not have a team contribute to the list.

Finally, here’s an even closer perspective on the players themselves, looking at the following:

–Total Attempts for all running backs the next year AFTER they led a season in touches (Tot. ATT NY)

–The percentage of Hall of Fame eligible players in this list who have actually made it to Canton (HOF%).

Nearly 71% of running backs who led the league in touches declined the next season. Considering the Y/A decline isn’t very massive, it says a lot about how unimpressive a lot of these seasons were. The volume was there, but the efficiency? Not so much. It’s understandable that a RB is usually unable to carry the workload on one season. Not too many can ever do that My expectation for DeMarco Murray, for example, is to regress a bit.

What interests me, however, is the average age in which running backs led the league in touches (25.94). Considering about 71% of these guys declined the very next year, does this mean the lifespan of running backs is getting shorter and shorter by every passing year? I don’t buy that, since, as stated before, guys like Marshawn Lynch and Frank Gore are still balling out despite being “old”. 22.73% of these guys are even in the Hall of Fame. That’s 5 guys out of 22 eligible running backs for the Hall of Fame in this list. Those guys are; Eric Dickerson, Thurman Thomas, Emmitt Smith, Curtis Martin, and recently, Jerome Bettis.

On the other hand, the way a running back is used can affect their lifespan in the NFL. Looking back on it now, giving Larry Johnson 416 touches seems like the work of a mad man, but back then, it was essential in getting the Chiefs to the playoffs that year. Perhaps we’ll look back on DeMarco Murray’s 2014 season the same way, but, along with the OL, he was essential in taking breathing room off of Dallas’ passing game.

Regardless, my study has confirmed that leading a season in touches is more of a curse than it is a blessing. If you’re going to have your running back lead a season doing that, I hope your team has a great medical plan.

If you get my gist.