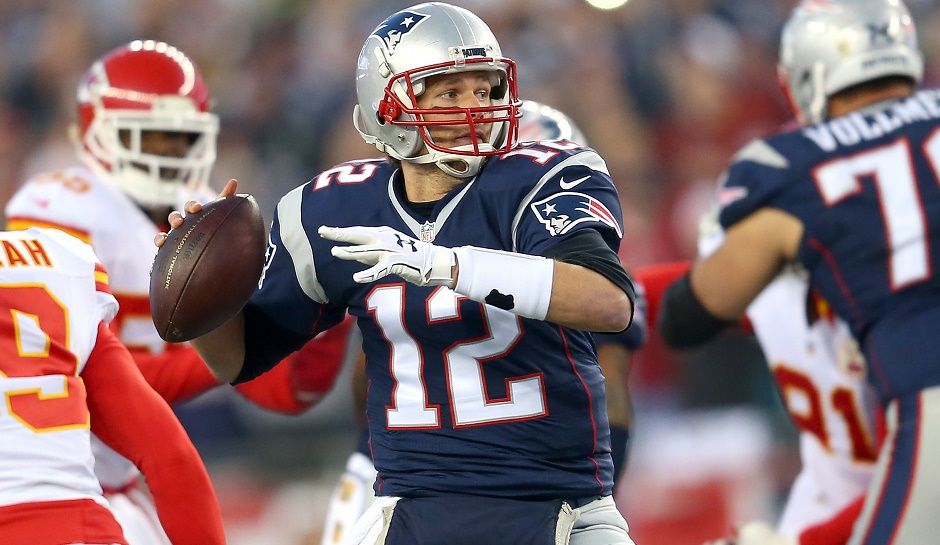 Through one regular season game we already have the upset of the season.

Yeah, no one was expecting the Chiefs to come close to matching with the Patriots, much less win by multiple scores. But it happened, when the Chiefs came alive in the 4th quarter and scored 21 unanswered points en route to a shocking 42-27 victory. It was the first win by multiple scores from a road team at Gillette Stadium with Tom Brady starting since the Ravens did it in the 2012 AFC Championship game. That’s extremely rare in the 2010s’ for a team to do that in New England.

And credit goes to Kansas City. They did it without Spencer Ware or Jeremy Maclin. They did it with a Travis Kelce penalty that looked like it would cost them the game. Alex Smith played really well in the 2nd half, and Kareem Hunt looked like David Johnson with the scrimmage yards he was putting up. Tyreek Hill is a really good offensive weapon as well if schemed correctly. And of course, Andy Reid had a terrific game calling the offense.

But one game plan that might be overlooked is the one Chiefs’ defensive coordinator Bob Sutton put up. While the Chiefs gave up 27 points, they were aided by several defensive pass interference calls that allowed the Patriots to get inside the red zone. They only had 3 sacks, but they limited Tom Brady to 16/36 for 267 yards and zero touchdown passes. Zero touchdown passes on his home turf? Yeah, I’m definitely giving the defense credit for that.

It goes further than that. Despite not collecting a single turnover and generating very few sacks, upon further inspection, the lack of pressure actually benefitted the Chiefs’ defense. In fact, that was the goal the team had in mind throughout the game. You may be wondering what I’m talking about, which is what this article is for.

Tom Brady has never been a great deep passer. His accuracy on throws of 16+ last year was 16th. On throws or 20+, he was 18th. He’s a quarterback that has been sensational in the short/intermediate range.

Brady is highly noted as a fantastic pre snap quarterback that knows how to read defenses before the snap and understands where to throw the ball. Playing in a great, but complex system that encourages quick throws underneath and in between 10-15 yards has allowed Brady to develop as one of the game’s greatest players.

The Chiefs’ defense didn’t allow for that at all. The game plan that sent packages of three-man rushes to Brady was highly scrutinized early on. It made the Patriots’ offensive line look amazing, but in the long run, it worked. It stressed Brady’s weaknesses and suffocated his strengths.

With the constant three-man rushes, the Chiefs defense was able to cover the underneath routes in which the Patriots’ offense has consistently thrived on for years. With Brady forced to throw downfield, his accuracy waned. It doesn’t mean that Brady is declining. In fact, against lesser game plans you can expect the same high quality of play he has provided in his future Hall of Fame career.

It’s just that the Chiefs’ defense on Thursday night was one of the rare teams to feature the blueprint on how to make the five time Super Bowl winning quarterback struggle.

Right from the very first play of the game, the Chiefs defense wasn’t messing around. The play above looks like an awful miss from Brady, and it is. But it’s a point the Chiefs were trying to make. On throws of 16+ air yards, Brady had 96 yards, but was only 3/16 from that range. That’s an 18.8 CMP%. Even factoring in a drop or two, the Chiefs overwhelmed Brady with this strategy.

Rob Gronkowski is the best tight end in the league, and nearly impossible to cover overall. His size, strength and catching ability make the Patriots offense that much more dangerous.

The Chiefs limited Gronk to 2 catches for 33 yards (even with the dropped TD, that’s still 3 catches for 53 yards). This was because Gronk was double covered the entire game. The Chiefs could afford to do this because they only sent packages of 3 and 4 man blitzes to go after the offensive line. What that did was allow the underneath routes no breathing room, and that in turn allowed for constant double coverage on Gronk with little harm.

On this play, the same thing happens. This is clearly designed to be a throw to Gronk, but Derrick Johnson (#56) helps play the double coverage beautifully. With nowhere to throw the ball, Brady just throws it away. It can be argued he should’ve ran for the touchdown, but at 40 years of age and not being known as a mobile QB, I can’t fault him for not trying.

The Chiefs did their part in limited the underneath game in which New England has built itself on for years. Brady was 6/8 (with a drop) for only 33 yards on underneath throws, with none of those completions going over 8 yards.

Plays like this are why. This is a 3 man rush when it looks like more are lining up. This would allow Brady a quick outlet if it were so, but because of the disguise, the QB is forced to attempt to hit a tight throw downfield, something Brady struggles to do. The pass is overthrown.

This coverage is extremely impressive. Again, the Chiefs only send in 3 rushers. The most impressive part about this is that the two underneath routes are double covered. This only leaves the left outside receiver as an open guy. The throw is wide, the Chiefs defense does their job. Beautiful scheme from Bob Sutton.

So this all occurred in the first 2 drives for New England. Right away, I knew something was up. The receivers weren’t getting open as quickly as we’re used to seeing from them. Brady wasn’t playing horrible, he was just put outside his comfort zone because the Chiefs covered his strengths so well.

By now, everyone knows the Patriots pull out trick plays every once in a while, and have impressively executed on flea flickers. The Chiefs covered that as well on this play. You’ll notice Justin Houston (#50) sees the opportunity once James White flicks the ball to Brady, and wastes no time in putting panic into the QB’s brain. This prevents the flea flicker from fully developing, and Brady is forced to throw the ball into the ground, where he may have gotten away with an intentional grounding penalty.

This was the turning point of the game where the outcome finally landed in Kansas City’s favor. After Brady completed a 51-yard pass to Brandin Cooks, it looked like the Patriots couldn’t be stopped and the Chiefs were finished. But as they did throughout the entire game, they stepped up in the red zone against the pass.

The two tackles on this play allow immediate pressure on Brady, forcing him to climb out of the pocket. With the outside routes double covered and everything taken out by single man coverage underneath, Brady tries to run for it all, to no avail. He goes past the line of scrimmage and attempts to get away with a touchdown throw, which the officials saw right past. This resulted in a loss of downs, a field goal instead of a touchdown, allowing the Chiefs to immediately take the lead back the following drive and hold onto for the rest of the game.

At this point, the Chiefs defense was consistently providing 3 man rushes to limit every passing opportunity Brady could get. This is when the pressure at last got to him.

These two sacks by Justin Houston pretty much sealed the deal. With the pressure being unleashed, one of the premier defenders of our generation was able to get two monumental sacks on Brady, the 2nd of which nearly caused a safety.

No play was bigger than the one corner Terrance Mitchell put on the Patriots’ 2nd last drive. With Brady out of options, he tried to send one downfield once more. The throw was perfect, but Mitchell just made an outstanding play to disrupt the completion and force the Patriots to punt, where the Chiefs put the game away for good with another scoring drive.

Coming in expecting a blowout Patriots’ victory, we instead got a (somewhat) blowout Chiefs upset win on the road. While New England scored 27 points, they were aided by three defensive pass interference calls on three separate drives, allowing them to move the ball inside the red zone for some easy rushing touchdowns.

This is where the context should not be blown out. Bob Sutton and the Chiefs defense put on a legendary show shutting down one of the greatest quarterbacks and offensive minds of all time. Kansas City was able to destroy the underneath passing game while also destroying any hopes the Patriots had at starting the deep passing game. Brady was constantly spooked while not being pressured as much until the very end, but that was the whole point.

This is what a defense like the Steelers could do but has never done up to this point when facing the Patriots. They constantly send in blitzes without adjusting and Brady can see right through it, allowing for blowout victories and the Steelers overwhelming losses despite all that talent on offense.

Instead, the Chiefs were able to call a diverse game, double covering underneath and outside many times while disguising pressure as a way to force Brady to try to overcome his weaknesses by pushing NE into more downfield throws. It was an ingenious game plan from Sutton.

Could this Chiefs team do it again in the playoffs against New England? Perhaps. That they were able to do it in Gillette Stadium is amazing. With Eric Berry out for the season, the defense has lost a massive piece they might not be able to overcome against the best teams in the league.

But even if that does happen, for what it’s worth, they shutdown the defending Super Bowl champions on their home turf with a masterful defensive show.