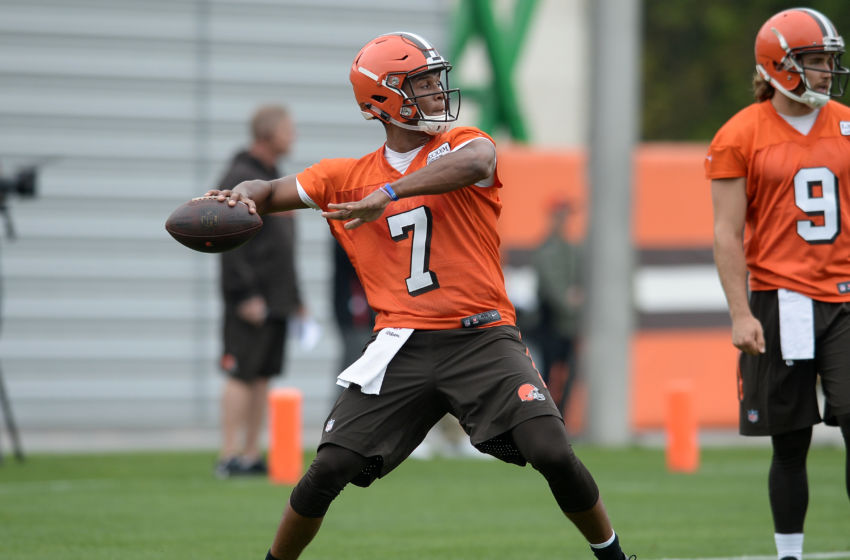 The Cleveland Browns’ historic quarterback carousal has gone round and round, never seeming to end.

Since the team’s return since 1999, they’ve been highlighted by the lack of a franchise quarterback. The closest Cleveland has seen to one was Tim Couch, and he was doomed from the start with a lack of talent around him. Derek Anderson’s 2007 season was the only year in the team’s expansion era that saw a QB selected to the Pro Bowl, and that turned out to be a fluke. Lakewood’s Brian Hoyer was supposed to be the hometown hero after not being Brandon Weeden in 2013, but his 2014 season wiped any hope away.

From bad quarterback to bad quarterback, the Browns have had nothing to show at the position, which is the biggest reason why they’ve failed to make the playoffs since 2002.

So with me singing the praises of how good the supporting cast on offense is for the 2017 team, it only feels appropriate to discuss how a good quarterback would take the team to the next level now that it has plenty of pieces on offense.

And wouldn’t you know it, the Browns drafted Toledo’s own Deshone Kizer this year in the 2nd round.

The Notre Dame prospect was one of the more discussed quarterbacks leading up to the 2017 draft, but was the fourth QB taken after the first 3 were grabbed as a result of teams trading up. To get a promising prospect in the 2nd round without giving up anything is great value for the Browns.

With word coming out that Kizer has been the most promising QB in Browns’ training camp, one wonders if he’ll get the starting job right away. As a Clevelander, I can tell you this; There are a lot of people who want him to sit for 2017 and learn the position while Cody Kessler starts.

The big issue with Kessler is that he generally lacks poise. He’s a very shaky player under pressure, often dropping his eyes panicking. This caused much of the pressure and sacks he ran into his rookie season. His mobility allows him to buy time outside of the pocket for some impressive plays, but he’s not subtle with his movement, and his arm strength is lacking.

But Kessler’s achilles’ heel comes from how he handles pressure.

The above two plays are sacks created by Kessler. You can see in both of these GIFs that his vision and poise are limited. He never puts himself in a comfortable state of mind where he can wait in or out of the pocket and deliver the throw. In the first GIF, he doesn’t see in the interior pressure, while in the 2nd, he fails to see exterior pressure.

This sack is the worst I’ve seen Kessler take. He doesn’t sense pressure coming around him and runs into his own sack. His pocket movement isn’t natural; He should have climbed the pocket instead of staying like a statue in his spot. If he had climbed the pocket and still took the sack, that would’ve been much more acceptable.

Ultimately, having a QB learn by sitting doesn’t make any sense, and it doesn’t in this case when Kessler is a flawed quarterback himself.

Besides, what good is it to sit and learn when the best learning comes from actually playing on the field? You get better by practicing, not sitting on the field and watching from an angle that isn’t the same as the QB on the field. This narrative exists because quarterbacks like Aaron Rodgers sat behind Brett Favre, a Hall of Famer. Philip Rivers sat behind Drew Brees. Steve Young sat behind Joe Montana. All Hall of Famers. The Browns have had experience with this when they sat Johnny Manziel behind Brian Hoyer for his rookie season, and that turned out well.

Before I get carried away though, let’s get back to Kizer. If reports of his rise are true, he could very well be the quarterback that ends the Browns’ QB curse and take the team over the hump. After he was drafted, I sat down and watched his 2016 season, coming away impressed with what I had seen.

Kizer brings something to the table that Kessler does not: Consistency in the pocket and under pressure. With Kessler, he drops his eyes when faced with pressure, and you don’t know whether he’ll make subtle movements or run into a sack. With Kizer, you get someone that constantly keeps his eyes downfield even when faced with heavy pressure.

On this play, Kizer is faced with an unblocked defender up at him. The receiver in the flat is open while this is occurring. The QB notices this and focuses his attention on that. He’s tripped up, but steps up in the pocket, keeping his eyes on the receiver, and fires a pass. It’s not the most accurate throw, but it’s a sensational play under heavy pressure because of Kizer’s concentration.

The best QBs in the pros focus on maximizing the results of the play however they can. This doesn’t just include scrambling out the pocket; A lot of times it involves taking hits you know you can’t avoid if you want the play to succeed. On this play, Kizer does just that. What makes this work is that he doesn’t anticipate pressure. This has no effect on his mechanics, allowing him to complete a tough pass while taking a crushing blow.

The Browns’ offensive line won’t put Kizer under as much pressure as he was in college, so for a QB to exhibit this quality under it is magnificent.

Kizer’s pocket movement is sensational. He is a smart quarterback who understands how to create subtle movements to avoid tacklers. On this play, he glides left of pressure while keeping his eyes downfield. This allows him to hit the shallow crossing route while putting himself out of harm’s way.

Going further into his movement, Kizer also has terrific footwork. This was one of his biggest selling points going into the draft (Derrik Klassen raves about it all the time), and you’ll get no rebuttal here. When using your feet, it’s obviously important that they’re pointing in the direction where you want to throw the football. It won’t always be as easy when you have to make movements in and out of the pocket. With Kizer, his feet are consistently smooth.

On this play, the QB spots an open receiver downfield. He’s able to sidestep a tackler using small movements. This allows him to stay in the general area without going too far out of it. His poise is excellent, and he lofts a great pass into his receiver’s breadbasket.

With many college quarterbacks, you get guys that require their first reads to be open. These tend not to be players that throw with anticipation, instead requiring receivers to create separation on their own. With Kizer, you get a guy that does not panic when his first read isn’t open. As shown on the play above, he keeps his composure and surveys the field, firing a beautiful dart across the middle of the field after sidestepping pressure.

Lastly, Kizer has good arm strength to work with. His talent allows him to control the speed of which he’s throwing so he can attack tight windows. This has helped elevate his teammates in Notre Dame when facing those regards. Compared to Kessler, there’s a lot more room to work with in his arm.

While Kizer does do a lot of things beautifully, his accuracy could be a major flaw if it’s not improved. It’s true that Kizer’s accuracy can be really bad, but in an offense with plenty of safe throws a couple of talented receivers, it’ll be a bit easier for the QB to develop his precision.

These two plays were the biggest strikes I had of Kizer’s film. He reminds me of Jameis Winston in that when he misses, he can miss horribly. That he has taken the biggest leap in training camp would suggest that his accuracy is being trained upon, but I take training camp with far less credentials than the regular season or even preseason.

Despite criticisms of his accuracy, Deshone Kizer is an otherwise wonderful prospect. His footwork, play under pressure, arm strength, pocket movement, and overall poise are all excellent and a dream come true for the Browns if he starts from day 1. He’s with a really good supporting cast on offense, one with a great coordinator in Hue Jackson, a great run duo in Duke Johnson and Isaiah Crowell, and behind one of the best offensive lines in the league.

If his accuracy improves, Kizer could be the franchise quarterback Browns fans have waited so long for. Outside of it, he does everything right, which will allow him to have more room to improve on his flaws while working in a quarterback friendly environment. I think he should start in Week 1, but time will tell if that is guaranteed.

But for what it’s worth, the Browns have drafted a really exciting prospect at the quarterback position, one that has the best shot at ending the team’s curse that I’ve seen as a fan.