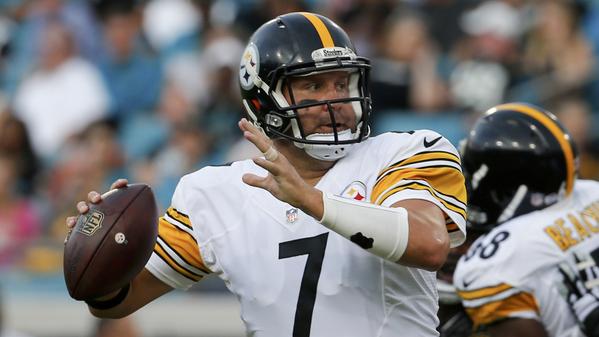 It’s great to have the NFL back. Unless you’re living in Pittsburgh, that is.

The 28-21 final score was aided by a garbage time TD drive from Pittsburgh, and an absolutely terrible performance by the Steel Curtain defense. The coaching and gameplan in general played scared, with Pittsburgh punting down 14 with 8 ½ minutes left in the 4th quarter.

The main story throughout Friday will be Tom Brady’s 4 TD performance, as well as Rob Gronkowski’s 3 TD performance. But below the surface, I feel it’s Ben Roethlisberger that deserves to be talked about right now.

This Is NOT Clickbait: Ben Roethlisberger Outplayed Tom Brady

Think again. Going solely by box score ignores different playing styles, as well as the defenses both teams were facing.

Tom Brady was effective Thursday Night, at one point completion 19 consecutive passes (all-time record is 24 by Donovan McNabb). The truth, however, is that most of his completions came on easy plays. For unexplainable reasons, the Steelers left Gronk and Julian Edelman wide open all night, allowing Brady to make the easy throws. The short game was also relieved heavily on, as receivers were constantly uncovered on New England’s dink and dunk offense. Brady’s stat-line LOOKS impressive, but he made very few impressive throws overall.

In other words, Brady’s stats look so gaudy because the Steelers’ defense screwed up on coverage and tackling (Take for example Brady’s 2nd TD pass; After Gronkowski broke a tackle, corner Antwon Blake had a clear shot to tackle Gronk short of the end zone, but simply half-assed his way there, allowing the dominant tight end to easily score a touchdown).

On the other hand, Roethlisberger played a more impressive game. He was far more accurate on the money ball, and got screwed over by inconsistent play from his receivers. Markus Wheaton failed at the catch point a couple of times, and these came on pinpoint accurate passes from Ben. Darrius Heyward-Bey stepped out of bounds on what should have been a TD catch on an impressive deep throw from Ben, and took an ill-advised slide short of the first down late in the game. The conservative playcalling and gratuitous trick plays from Todd Haley destroyed any hopes of momentum Big Ben and the Steelers had worked hard on.

I’m not really tough on Roethlisberger’s late interception either. Yeah, it wasn’t a good throw (RE: underthrown), but when you’re down multiple possessions in the 4th quarter, you have to force a big play somehow.

Despite an awful performance from his surrounding cast (not including DE Angelo Williams, who had a surprisingly good game), Roethlisberger ended up throwing for 351 yards. While an amount of this was achieved in garbage time, Ben’s receivers and poor coaching left a lot of yards and points on the field, so it somewhat evens out in my opinion.

The bad news is that if Pittsburgh’s defense continues to look this way, Big Ben will be asked to do too much to get the Steelers wins. It’s a shame, because Ben is a top 5 QB coming off an elite season in 2014.