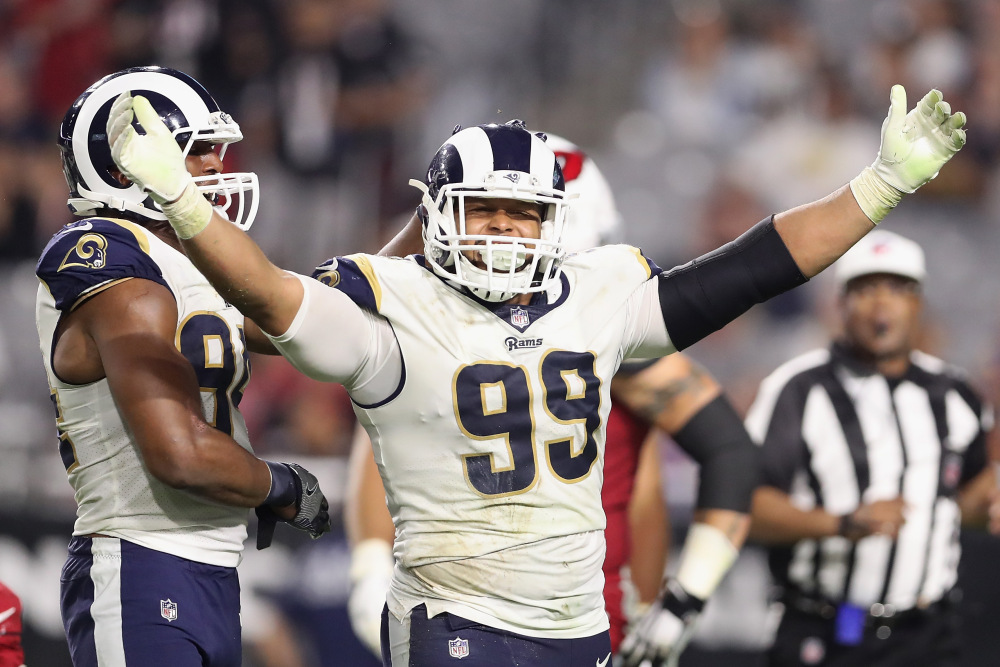 If you’re still here from the absolute acid trip that’s been the first half of the 2018 NFL season, congratulations! Not a lot has made sense, from the Bills murdering the Vikings, a Brock Osweiler led Dolphins team bulldozing the Bears defense, or the Eagles offensive line suddenly being garbage, but I’ve learned to embrace the chaos, because trust me, it makes sense that way.

We even have some surprise first place teams heading into Week 9, and that’s where this piece comes in. I haven’t written an article for my own website for a while due to the commitment I’ve made writing for other sites, but I feel the halfway point of the season is a perfect place to start.

With this said, this article will rank the division leaders from first to last, so buckle up and embrace the chaos.

Who else could it be? I made the incredibly difficult decision of putting the only remaining undefeated team in the league at the top, so there’s that.

There’s not much else to say about this team, but Sean McVay has done a near flawless job with his game management. And yeah, he just might get two Coach of the Year awards before he hits 33 years of age. Damn.

Joining Mahomes is a sensational group of skill players in Tyreek Hill, Travis Kelce, Sammy Watkins and Kareem Hunt. Andy Reid has taken his influence from seemingly any offensive scheme that’s ever existed, so Kansas City introduces a new wrinkle every week.

Of course, we wish this historic offense could have even an average defense. Dee Ford is having a career season in a contract year, for what it’s worth, but this team needs more help from its defense if it wants to win the Super Bowl this year.

The defense, like Kansas City’s, is a train wreck, but the Saints offense has so many pieces, which is more than enough to land the Saints at #3.

Drew Brees, Michael Thomas, and Alvin Kamara are once again having strong seasons, plus the offensive line might be the best in the league. Pieces like Taysom Hill and Tre’Quan Smith have also stepped up when they’ve been in position to, and Sean Payton keeps the play calling fresh per usual.

The secondary has been brutal, but it’s not all bad for the Saints defense. Cameron Jordan is putting together another solid season, Sheldon Rankins is coming off a big game against the Vikings, and Marcus Davenport has put together a good rookie season (yeah yeah they gave up two first rounders for him I know).

Just when you think the Patriots don’t look as threatening as they used to be, they suddenly are again. Bill Belichick and Tom Brady still have tricks up their sleeves on offense, even with a defense that’s mostly been rough (facing the Bills offense doesn’t change anything).

Essentially, while they’re far from the most talented team in the league, the Patriots are riding to 6-2 because their top pieces are excellent. In other words, they’re set if Belichick and Brady continue to not suck. James White has been having an excellent season thus far though, and a once thin receiving corps entering the season has Rob Gronkowski, Josh Gordon and Julian Edelman added to the mix.

The Steelers have looked ugly in pretty much every game this season, yet here they are on top of the AFC North yet again.

The defense has been somewhat frustrating, but actually ranks quite high in quarterback hits, which is something. Meanwhile the offense in Le’Veon Bell’s continued absence has remained explosive, with James Conner off to a blockbuster start to the season, Antonio Brown and JuJu Smith-Schuster remaining excellent, and the offensive line shutting down defenses, giving up only ten sacks on the year (tied for second fewest behind the Saints).

What keeps this time from ranking higher is their record, the inconsistency of Ben Roethlisberger, and the tendency to start off really ugly. Still, they’re taking advantage of their opportunities for the most part in a sloppy AFC North, so they’ve got that going for them, which is nice.

In a wild NFC North, it’s the Bears that have emerged at the top at the halfway point, and this was after being in last place the week prior!

Say what you want about this team, but if Mitchell Trubisky wasn’t so frustrating, this team wouldn’t be that far behind the Rams and Saints. The offense features a good offensive line and a talented group of skill players in Tarik Cohen, Taylor Gabriel, Allen Robinson, Anthony Miller Trey Burton and Jordan Howard.

Khalil Mack has had a chance to heal up for a change, so hopefully he returns as dominant as ever. Meanwhile the defense, outside of a couple bad moments, has been on fire, with standout players including Akiem Hicks, Bylal Nichols, Bryce Callahan, Kyle Fuller, and (of course) Khalil Mack when healthy.

If this team ever got better quarterback play, they’d remain a playoff contender. Until then, they have to prove it, especially since they’ve only played one game against a divisional opponent (One that they would’ve won if Kyle Fuller hangs onto that interception).

The Redskins defense has really come into its own this season. The front seven is loaded with playmakers including Ryan Kerrigan, Matt Ioannidis, Preston Smith, Zach Brown, Jonathan Allen and Da’Ron Payne, while D.J. Swearinger is having a great year in the secondary. The reemergence of Adrian Peterson has been cool to watch as well.

However, outside of Peterson, does Washington’s offense scare you at all? The receiving corps isn’t bad, but Alex Smith has regressed back into a safe, conservative player. He’s still managed to win over Redskins fans because they’re 5-2, but they’re 5-2 because of Peterson and that defense. Besides, do you trust Smith with how he’s currently playing to handle some of the better teams in the NFC?

Smith at QB limits how the Redskins can win, but the defense remains fun.

How are the Texans 5-3? I’m still baffled by this considering they’re coached by Bill O’Brien, have an atrocious offensive line, and have a quarterback with a collapsed lung.

Credit to them, though, because they’ve taken advantage of the recent incompetence of the Jaguars and Titans, winning their last five games after starting 0-3 to take over first place in the AFC South. Deshaun Watson has taken steps forward in my opinion, and Deandre Hopkins is awesome as per usual. On defense, Jadeveon Clowney is putting together another quality year, and J.J. Watt is the Comeback Player of the Year.

Credit to the Texans offensive line (to some extent), because they’ve only allowed six quarterback hits in the last two games after allowing 70 in their first six games. They travel to Denver this week though, so prayers up for Watson.

This team ranks at the bottom of the divisional opponents largely because of the offensive line and Bill O’Brien. Losing Will Fuller for the season is massive, but at least they addressed this somewhat by trading for Demaryius Thomas from the very team they face this week.

(Featured image via The Big Lead)