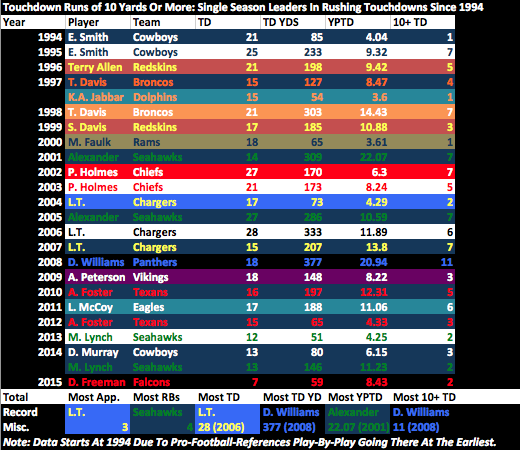 Devonta Freeman Is On Pace For A Record Season For Runningbacks

The Atlanta Falcons have lived up to all expectations thus far in 2015. Starting off at 4-0, they’ve had to collect game winning drives in 3 of their 4 victories this season, yet are coming off a comfortable landslide victory against the Houston Texans.

There are many contributing factors to this; Matt Ryan, Julio Jones, the improved offensive line and defense, and the easy schedule, but there’s also another player who deserves being mentioned. That player is 2nd-year runningback Devonta Freeman, a 2014 4th round draft pick out of Florida State.

Freeman, 23, has been a pleasant surprise for the Falcons offense so far, but more on that later. He’s on pace to do something that hasn’t been done in a long time; match the single season rushing touchdown record held by LaDanian Tomlinson (28 in 2006). His 7 touchdowns through the first 4 games is the most since Tomlinson had 8 in 2005 (yes, his 2006 season didn’t come close; he only had 3 TDs in his first 4 games of 2006), and is also tied for 5th all time.

For more information, please see the chart below.

Shoutout goes to @Topher_Doll for lending me a hand and helping me with the chart.

Anyways, this feat is incredible, as no player has had at least 20 since 2007. It also led me to look at what Tomlinson did in his 2006 season. Freeman currently has 2 touchdown runs of 10+ yards. L.T. had 6 in his record-breaking season. At first, this seemed very low to me, until I went through the every single season leader dating back to 1994 (pro-football-reference’s play-by-play goes back there at the earliest, so I figured that would be a great starting point for my research) and discovered it’s actually a pretty high number.

Fascinated, I looked through the 22 seasons spanning from 1994-today, with 2 ties in rushing TD (1997, 2014). I calculated yards on touchdown runs (TD YDS), Yards Per TD Run (Total Number Of Yards On TD Runs/Amount of TD Runs), and the number of TD runs that went at least 10 yards (10+ TD). My results are listed below. 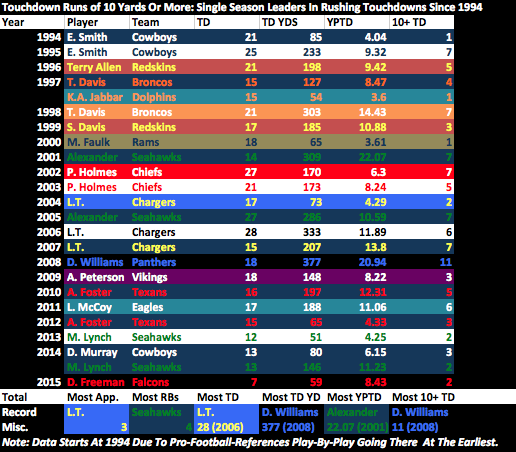 It’s hilarious to me that 6 times a player finished with 7 TD runs of 10+ yards, and that was originally the most in this span until DeAngelo Williams said YOLO with 11 TD runs of 10+ yards in 2008 (also finishing with the most yards on TD runs since 1994). Shaun Alexander had 22.07 yards per TD run, which is amazing, as is Tomlinson’s 3 seasons leading in rushing touchdowns.

The point of this chart isn’t to say who had the better single season; this is up to debate amongst you all. My point is to illustrate where Devonta Freeman is at in the season so far. His YPA (3.8) may seem like a concern, but don’t believe it. His low YPA in his first 2 games (1.8 against the Eagles, and 2.1 at the Giants) were the result of poor run blocking. As Atlanta blocked better, Freeman has excelled in his last 2 games, collecting 4.8 yards per attempt. His vision, power, and aggressive running have allowed him to play very well thus far in the season.

The Falcons’ other feature back, Tevin Coleman, is recovering from a rib injury, but is expected to return, so I don’t think Freeman’s TD pace will last. But why stop the momentum? The schedule is more than manageable for Atlanta, and Freeman’s been off to a nice start.

Whether or not this lasts, it’s been much needed excitement for rushing statistics as a whole.