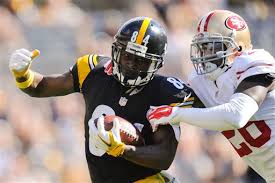 Between Tony Romo getting injured, Drew Brees potentially missing games, and a laundry list of other players that fit said criteria, Week 2 of 2015 felt like the sequel to the Body Bag Game.

Still, Week 2 felt like less of a mess than its predecessor. We saw higher quality performances from the offense, as well as surprisingly great games (looking at you, Travis Benjamin). As such, there is no better way to recap them than with a weekly awards column.

It’s way too early for MVP predictions, but somehow through 2 weeks, people are making them. With that said, if you’re going to do that, be sure to put Ben Roethlisberger at or near the top. He’s been on fire in the last 2 games, especially Week 2’s performance.

If you followed me for a while, you know that I make my own brand of deep ball statistics. Since ESPN and Pro Football Reference cite deep passes as at least 16 yards in the air, that’s where my criteria comes from. I enjoy doing an annual chart of qualifying quarterbacks on the deep ball, and plan to do it again after 2015.

What does this have to do with Big Ben, you ask? Well, his deep ball yardage total against the 49ers was higher than any single game performance from every qualifying quarterback from 2014. Ben was 7/9 on the money ball for 286 yards and a touchdown. That’s unheard of.

Big Ben passes both the stat and film test, looking on point and using his mobility to create big plays the vintage Roethlisberger way. His 13.7 yards per attempt were the 2nd highest of his entire career, and the highest since the 2005 season opener against the Titans (19.8).

Finally, for those of you complaining that I gave Big Ben the award and not Tom Brady despite higher stats and playing against the Bills defense on the road, Brady was very spotty in certain areas, so his accuracy halted a bit. Should we discredit him for playing prolifically against an awful Steelers defense in the season opener? It’s close, but Ben was just more consistently accurate, and the ball placement was top notch.

In a week that lacked relatively good RB performances, Jamaal Charles stands above the rest. Sure, he had 2 fumbles, but the last one should not have even happened (take a knee, Andy Reid).

Charles was the fuel in a Chiefs offense that struggled throughout the day, and was the main reason that side of the ball stayed competitive throughout the game. Charles is a top 5 rusher in the active NFL< and showcased that on Sunday. He finished with 125 yards on 21 carries (6.0 YPC) and a touchdown.

With Jordy Nelson out, the best route runner in the league has to be Antonio Brown. Showcasing his elite route running against San Francisco, Brown kept getting open on the constant, putting on a show as always. I could go on, but I’ve said so much about Brown’s game at this point that it’s already described his performance against the 49ers

Brown finished with 195 yards on 9 catches and a touchdown.

It currently isn’t close. Rob Gronkowski is the best tight end in the NFL by far (though other promising young studs such as Travis Kelce, Zach Ertz, and Tyler Eifert plan to take over some day). His size, athleticism, and efficiency in the redzone are unequaled for his position.

On Sunday against the Bills, Gronk proved this, and then some. He was surprisingly effective as a deep threat, and was the usual YAC threat we’ve come to know and love over the years. He finished with 7 catches for 113 yards and a touchdown.

Defensive Player of the Week

No, this is not a typo. Aaron Donald is THIS good, winning for a 2nd straight week. Against the Redskins, Donald was a one-man army in pressure, and stopped a few plays for little gain, such as the one below. 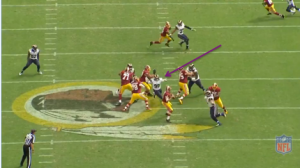 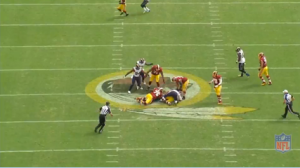 Simply put, Donald cannot be stopped, and was not on Sunday.

No contest here. Justin Tucker, who I consider to be the best active kicker in the league, stayed strong despite the loss the Oakland, going 4/4 on field goals, including 2/2 from 30-39 yards, keeping the Ravens competitive in Week 2.

Most writers (including me) chalked this up as a Chiefs victory. And why not? The game was at Arrowhead Stadium, one of the loudest in the NFL, and Peyton Manning just about looked done when he threw that pick six.

Somehow, someway, though, the Denver Broncos prevailed 31-24. Outside Jamaal Charles, the Chiefs offense was a disaster, with Alex Smith having the worst game of his career in Kansas City, the offensive line allowing pressure, and the receiving game getting shut down by Denver’s strong defense.

Manning, who looked really ugly throughout the game, managed to pull out a spectacular game tying drive late in the 4th quarter, ending in a perfect touchdown throw to Emmanuel Sanders. Then, for reasons we will never understand, Andy Reid advised Kansas City to run, and the rest is history. Charles fumbled, Bradley Roby scooped it up for one of the most shocking touchdowns you’ll ever see, and now the Broncos are pulling off the most heinous 2-0 start I’ve witnessed in a while.

On the bright side for the Chiefs, their defense managed to get me 11 fantasy points, helping secure a 2-0 start of my own.

Weird start to 2015. The New York Jets are 2-0, and are starting that way rather impressively.

On offense, the Jets weren’t spectacular, but rather effective. Such describes Ryan Fitzpatrick, but Brandon Marshall has been impressive with the Jets thus far, as has Chris Ivory.

We’ll see if this can last, but the Jets’ 20-7 win on the road suggests they’re here to stay.