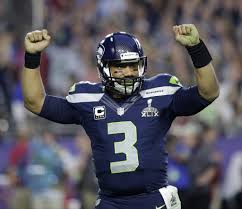 Peyton Manning. Tom Brady. Drew Brees. Aaron Rodgers. Widely known as “The Big 4” or “The Elite Quarterbacks” of today’s NFL, these quarterbacks will all end up in the Hall of Fame when they decide to hang it up. All 4 are some of the greatest quarterbacks we will ever see, and it is a privilege to have watched all 4 play in this era.

So when did we as an audience act like these are the only guys that matter?

Making it in the NFL isn’t easy. Quarterback in particular. The most important part of a football team, it’s been difficult to find a sustainable QB these days, as it has been since the game’s founding. That’s why any success that lasts for more than 3-4 years is a gift for any team when it comes to the quarterback position.

That’s why teams such as the Browns, Bills, Raiders, Jaguars, Buccaneers, and Titans never make the playoffs. Look at who they’ve had at QB in the last 15 years. Clearly there are some Pro Bowlers and a couple of very good quarterbacks, but in its entirety, it’s not an all-pro roster.

And yet, a lot of the guys that don’t have to be weeded out aren’t looked at fondly. At least on Twitter, where these guys are “slandered”, so to speak. To the real football fans, however, there’s more than 4 successful field generals in this league, and there’s been more successful quarterbacks in this league than one would think.

The rest is explained below:

We’ve Been Spoiled By The Rookie Seasons Of Certain Quarterbacks

Marino, Ben, Luck, Wilson, RGIII, Matt Ryan. These are examples of quarterbacks whose rookie seasons have been highly regarded by many. This can be both a blessing and curse at the same time, as expectations for other rookies can be a bit unfair, especially in regards to surrounding cast, skill set, and coaching.

Ryan Tannehill broke out in his 3rd season after finally running an actual offense, Cam Newton made it to the playoffs for the first time in his career, and Matthew Stafford struggled with consistency and injuries before exploding in 2011.

It can vary when a QB actually does arrive, as explained in the chart below.

Guys like Roethlisberger, Luck, RGIII, Wilson, Newton, Dalton, and Ryan all became prominent once they started playing. But what about Drew Brees? He sucked in 2003 before reviving his career in 2004, winning Comeback Player of the Year. Yes, Rivers, Rodgers, and Romo all sat, but a guy like Alex Smith took 7 years to break out. Ouch. Speaking of ouch, Stafford couldn’t hold back any injuries before doing so in 2011. Ryan Tannehill was on his way out of Miami early in 2014 before lighting a fire under his ass and having a nice season. Eli Manning was nothing special until that 2007 Cinderella playoff run. Joe Flacco was ok, but it was really 2010 where he broke out. Carson Palmer broke out 3 years after he was drafted, as did Jay Cutler. Even Peyton and Brady had to wait a year before breaking out.

As stated before, this can vary, so let’s not give everyone the same expectations right out of the gate.

These days, QBs drafted first overall receive almost zero criticism. Now obviously I am not referring to Peyton Manning. No matter what he does, he can never escape criticism for his shortcomings. Andrew Luck’s is on and off.” But, to me, it feels like some of the #1 drafted picks meant to be the “savior” of their respective teams get away with their respective shortcomings.

Sam Bradford has escaped with a ridiculous amount of money and is rarely talked about. Matthew Stafford has an abysmal record against winning teams, but that’s ok because he’s an excellent choice for Fantasy Football because of his volume. Cam Newton gets less slack than Colin Kaepernick despite not being as good in the postseason or having as many wins. Michael Vick has escaped almost any slander for his on-field production, and got away with 2 $100M dollar contract extensions (Falcons, Eagles).

Alex Smith, drafted #1 overall in 2005, is treated like an undrafted success story because of his winning record since 2011, despite limited production. Tony Romo, an actual undrafted pick, has been treated like a draft bust for the longest time due to a few failures in the clutch (2015 however has been much kinder). How does that make any sense? 3rd round success story Russell Wilson has been ripped to shreds for that interception in the Super Bowl this year despite earning a ring the previous year, as well as playing outstanding up to that point. Something doesn’t add up.

We know about 6th round outlier Tom Brady. His 4th ring will allow him to get less blame for failures down the line. But could you imagine if the Patriots didn’t win the Super Bowl? Brady would certainly receive some slack for his 2 interceptions thrown earlier in the game.

And that’s a thing Brady has long avoided compared to other late round/undrafted success stories. It’s either “win now or win never” in many fans’ eyes for a lot of quarterbacks. People will most likely remember Matt Schaub as a journeyman quarterback, but before that disaster of a 2013 season, he was actually a top 10 active quarterback from 2009-12. Rich Gannon is known as “the guy that threw 5 interceptions in the Super Bowl”, but at least he got the Raiders to that point. We’re talking about a 4th round pick who was a journeyman before finding a home in Oakland, where he made 4 consecutive Pro Bowls, received 2 First-Team All Pro selections, and won league MVP in 2002. That’s wonderful for a late pick and the last good quarterback the Raiders have had.

Tony Romo and Russell Wilson are two more success stories in this league. Both have excellent skill sets for their draft position, both are very mobile and can buy time in the pocket, extending for big plays, and both were considered MVP candidates at some point in their careers.

Everyone will remember Warren Moon and Kurt Warner, but what about Jeff Garcia? Sure, he had to follow in the footsteps of Joe Montana and Steve Young (both of which were very successful late round picks), but for an undrafted QB, he had a very good career in San Francisco, making 3 consecutive Pro Bowls from 2000-2002 (throwing for 11,160 yards, 84 TD, and 32 INT in that span), while making a 4th in Tampa Bay in 2007. Fellow 49er Colin Kaepernick has been ripped to shreds despite being one of the best postseason quarterbacks of this era, as well as 2 very good years in 2012-13.

People tend to rip Jake Delhomme, another undrafted pick, when praising John Fox for taking the Panthers to the Super Bowl (this is the same guy that couldn’t win one with Peyton Manning), when in actuality, Delhomme was a respectable and above average quarterback for a while. In fact, he performed better in the playoffs than most QBs of his era, earning at least a 96.0 passer rating in his first 6 postseason games (the dependability of that stat can very, and is almost useless these days). Not to mention he led an incredible near comeback against the Patriots in the 2004 Super Bowl, and set the SB record for longest touchdown pass (85-yarder to Muhsin Muhammad). It’s not like that 6-turnover game against the Cardinals in 2008 is the only thing he’s ever done after the regular season.

It seems like every good Seahawks quarterback has been a late round success. We know about Russell Wilson, but what about Dave Krieg? Yeah, he fumbled a shit ton, but, as an undrafted pick, he had a great career, breaking out in 1984 with 32 touchdown passes, as well as 12 years in Seattle and 3 Pro Bowl appearances. Matt Hasselbeck, a 6th round success story, lasted 10 years in Seattle, leading them to the playoffs 6 times, as well as making 3 Pro Bowls and 1 Super Bowl in a very good career. Even Warren Moon had a nice year when he came to Seattle in 1997.

I could go on, but that’s something you can look up on the internet for yourself. The point is, there’s more out there than just the top 5 quarterbacks in the active NFL. Matt Ryan, Joe Flacco, and Carson Palmer are first round picks that have had fine careers up to this point (the latter of which suffered an injury in the 2005 playoffs and was never the same since). There’s guys out there in both the first and later rounds that have had similar success.

Sustainable Success Is A Challenge To Find

There are more good quarterbacks out there than what casual audiences suspect. But in general, it’s still a rarity to find a good quarterback, and it will always be that way, no matter how pass happy this league is.

That’s how it was from 1998 to 2003, where the “cool” thing to do was find an old fart/journeyman/late round pick and see how far you could get with him. Warner, Brady, Gannon, and Garcia were and are success stories, but at the same time complete outliers.

However, from said era, late round picks seemed to have greater success than first round guys, as explained in the chart below. 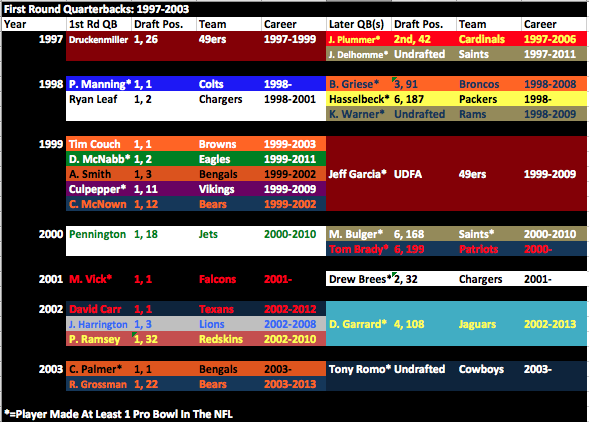 To the left is every first round quarterback drafted from 1998-2003. To the right are notable late round/undrafted picks from that span. You’ve got the notables (Warner, Brady, Brees, and Romo), as well as a few underrated guys (Hasselbeck, Delhomme, Garrard). Everyone on the right side made at least one Pro Bowl. Only 5 on the left made it.

Of course, we can all recognize Peyton Manning, Donovan McNabb, Daunte Culpepper, Michael Vick, and Carson Palmer. Even Chad Pennington to an extent. But Jim Druckenmiller (great name, I know) busted out of the league in his 3rd season. The Browns couldn’t find a respectable cast for Tim Couch, and he burned out after 6 years. Ryan Leaf is self explanatory, and Rex Grossman may be in all likelihood the worst quarterback to ever appear in a Super Bowl.

And yet we take these late round success stories for granted. They aren’t here forever.

When I say we must appreciate quarterback play more, does that mean we must like every QB? Probably not. Nevertheless, we must appreciate good QB play when it’s there. Even if that guy fades away the next year. The success stories in this league are ones that should be remembered for years, not ripped apart and spat on. Otherwise you’re acting spoiled.

It’s like a metaphor for life itself; nothing lasts forever, so cherish these moments while you still have them.