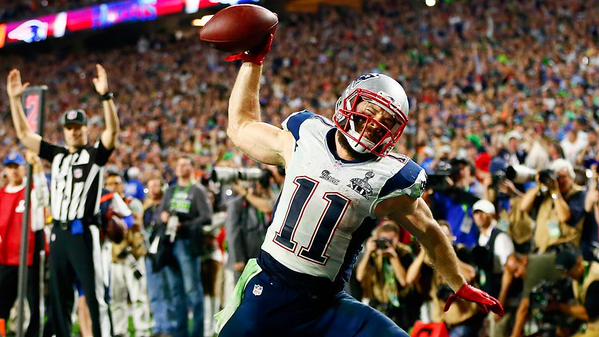 How The Patriots Won The Craziest Super Bowl Of The 2010s’

How The Patriots Won The Super Bowl

What. A. Game. Combine the anti-climatic ending with the terrible off-the-field stories, and you have an underwhelming 2014 season.

Let me get this out of the way: Congratulations to the New England Patriots, the fans, Tom Brady, Rob Gronkowski, Julian Edelman, Darrelle Revis, etc, etc, etc. Down 10 points, they came back to win the Super Bowl for the 4th time since 2001.

Back to the game. Now obviously, it was much better than the previous Super Bowl matchup, if only because things went right for the Patriots a bit more than the Broncos. Luck was on their side (no, not Andrew) far more against the Seahawks.

It didn’t seem that way in the first quarter, though. After Brady drove the Patriots down to the red zone near the end of the first quarter on their 2nd drive, he made a critical error under pressure from Seahawks defensive end Michael Bennett (who played a hell of a game), and forced an interception in the end zone to Jeremy Lane (corner), who injured his hand after the play and was out for the rest of the game.

None of it mattered, as the Seahawks receivers couldn’t get open on Seattle’s drive to enter the 2nd quarter, and New England’s defense forced a 3 and out. After the Patriots drove down the field in 9 plays, ending on a Brady 11-yard strike to Brandon LaFell, both New England and Seattle traded 3 and outs before Seattle finally got on the board, starting off with an excellent 44-yard pass to then unknown wide receiver Chris Matthews, for Wilson’s first completion of the night, and ending with a Marshawn Lynch 3-yard touchdown.

But the Patriots answered immediately, with Brady working the quick passes and culminating the drive on a beautiful 22-yard touchdown pass to Gronkowski. With 36 seconds, you’d think the Seahawks would just take a knee and let the clock run out. But Seattle kicked in the offense, with Robert Turbin started the drive off with an excellent 19-yard run. You can picture Turbin as a less powerful, but faster version of Marshawn Lynch, and he wouldn’t be a bad replacement to Beast Mode if he walked (especially considering he’s 25).

After Turbin’s run, Wilson took over for the rest of the drive, gaining a 17-yard rush while completing a big pass to Ricardo Lockette for 23 yards that was aided by a facemask penalty on New England. With 6 seconds left, would the Seahawks have time to run 2 plays? A quick attempt at the end zone would leave at least a second left to kick a field goal. Anything longer would be a wasted opportunity.

Pete Carroll elected to go for it all, and Wilson’s touchdown throw to Matthews was brilliantly executed. It was a big call from Big Balls Pete, and the Seahawks would get the ball to start the 2nd half as well.

Seattle wasted no time getting to the end zone, as Wilson and Lynch took stabs at the Patriots defense before getting stopped at the 8-yard line, ending in a Steven Hauschka field goal from 27-yards. And with Brady getting intercepted by MVP candidate Bobby Wagner (Please stop laughing, this actually happened) while looking for Gronk, Seattle gained even more momentum. Wilson and Lynch again tore apart the defense, and a 3-yard touchdown pass to Doug Baldwin gave Seattle a

Seattle forced another 3 and out to get the ball back with 3:15 left in the 3rd quarter. It appeared as if Seattle would pull away and win the game, forming the first true dynasty of the 2010s’.

But on 3rd and 2, Jermaine Kearse dropped an absolute dime from Wilson, one that would’ve been the dagger. Malcolm Butler (more on him later) put tight coverage on Kearse, but that should have been caught, no excuses.

Along with a Ted 2 commercial featuring Brady, apparently this was the fire the Patriots needed. After both teams traded 3 and outs again, Brady hooked up the short passes again, utilizing Julian Edelman for two 21-yard plays with tons of yards after the catch. A 4-yard touchdown pass to Danny Amendola cut the deficit to 3 points.

Seattle gave the ball back after a miscommunication between Wilson and Lynch resulted in an incomplete pass on 3rd and 5. New England took their time, as Brady completed all of his passes on the final drive, ending in a 4-yard strike to Edelman for the game-leading touchdown. This particular touchdown moved Brady past Montana for most Super Bowl touchdowns in NFL history (12). While Montana did it in 2 less games and with 0 interceptions, it’s still a nice honor.

All eyes were on Russell Wilson to respond. With 2:02 left, Wilson threw a terrific pass to Lynch for a 31-yard gain, before hitting Lockette for 11 yards on 3rd and 10. The very next play, Wilson threw a 33-yard pass that was bobbled, looped around, and somehow caught by Kearse. It was one of the greatest plays I’ve ever seen, and had Seattle scored, it would’ve been remembered far more than the David Tyree catch.

As Brady looked on the sideline (probably worried that New England would lose on yet another spectacular catch), Lynch ran the first play in the redzone for 4 yards. At this point, Seattle was on the 1-yard line, Bill Belichick was letting the clock run down instead of letting the Seahawks score (like he did in the rematch against the Giants in 2011), and we were all expecting SEA to score an easy touchdown. Belichick should have either taken a timeout or let the opposition score to give them some time.

But none of us expected what happened next.

For whatever reason, Seattle elected to THROW on 2nd and 1. Wilson’s pass intended for Lockette was picked off in the end zone by Malcolm Butler. I was shocked. Shocked that the play call somehow existed. This was Red Right 88 on steroids. The Seahawks needed one yard before they’d be in the pantheon of NFL dynasties, and they threw it all away. The pass itself wasn’t good by Wilson at all, but all the credit goes to Butler for making an excellent read on the slant play and picking Wilson off.

But the play call itself was just bad. This was the worst play call in any situation in NFL history. Marshawn Lynch, who scored 9 touchdowns in 10 career postseason games, also had his 6th 100-yard game in the playoffs. Apparently Seattle read that Lynch’s success rate on he 1-yard line wasn’t very good (1 successful attempt), but WHO CARES? All Seattle needed was one yard, and with the momentum Lynch had at the time, that was the worst thing they could have ever come up with.

After a fist fight, and a Michael Bennett caused encroachment penalty (foolish by the way), the Patriots got breathing room to kneel, ending the game and giving the Robert Kraft/Belichick/Brady era their 4th Super Bowl ring. It was a great way to go out, especially with the scandals and backlash the team received all season. Lucky or not, Brady led the game winning drive, and he did it without relying on his kicker or the running game. While not spectacular, credit is due for the now 3-time Super Bowl MVP for playing a tough game overall.

Tom Brady ended up becoming the 4th quarterback to throw for at least 10 touchdowns in a postseason. The previous 3 (Joe Montana 1989, Kurt Warner 2008, Joe Flacco 2013) all threw 11 in their respective postseason runs. Brady is also one of 6 quarterbacks to throw at least 4 touchdowns in a Super Bowl game, joining Terry Bradshaw, Doug Williams, Joe Montana, Troy Aikman, and Steve Young.

Russell Wilson, on the other hand, played a solid game in addition. While he only completed 12 passes, he had 20.6 yards per completion, in comparison to Brady’s 8.9 yards per completion. In addition, Wilson finished with a 90.8 Total QBR, higher than Brady’s 81.1 QBR. Calling him a game manager will not work; Russ played the game of his life, and it’s a shame it ended on a bad throw on a bad play call, because Wilson played an otherwise better game than last year’s Super Bowl.

It also made me pull up this: 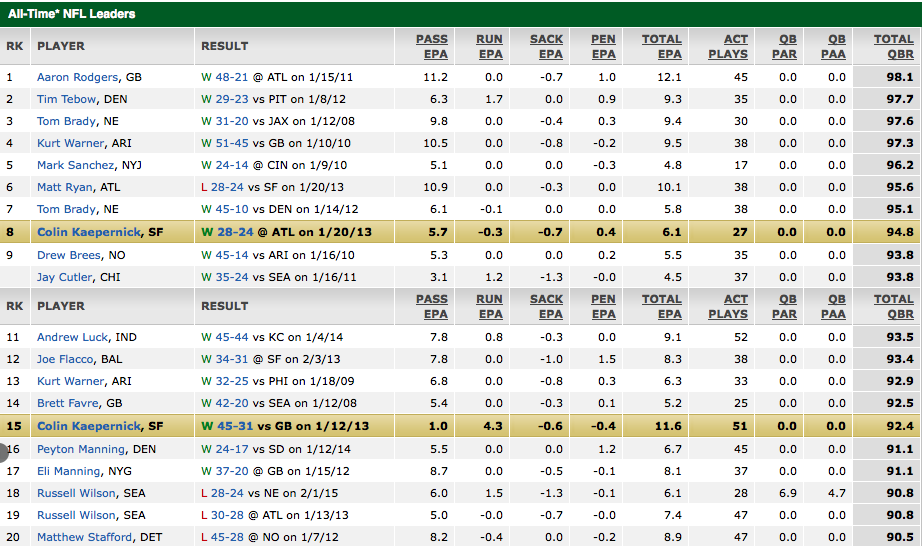 (No, I have no idea why Colin Kaepernick is highlighted, it’s an issue with my computer)

The chart above is of the 20 highest QBR performances in the playoffs since 2006, when the QBR stat was created by ESPN. Wilson’s 2 highest performances were both 90.8, and both came in losses. That’s rough, especially considering he arguably outplayed both of the quarterbacks he faced in the respective games. With a bit more luck (Kearse not dropping a dime for example), he’d have his 2nd Super Bowl ring, and perhaps a top 5 spot in the eyes of many. He played excellent despite the lack of a true deep threat (outside of Chris Matthews, who came out of nowhere in the Super Bowl to make his first statistical performance ever, catching 4 passes for 109 yards and a touchdown).

What’s odd is the Seahawks didn’t even target their tight ends once throughout the entire game, despite New England’s defense ranking 30th in DVOA against Tight Ends according to Football Outsiders. While offensive coordinator Darrell Bevell is too busy throwing Ricardo Lockette under the bus, he should be able to recognize some of his play calls cost Seattle a 2nd consecutive title (Then again, you can argue Pete Carroll cost Seattle playoff wins twice in the last 3 seasons. Icing Matt Bryant in Atlanta in 2012 (in which he missed) bit him in the back when Bryant kicked the game winning 49-yard field goal to send the Falcons to the NFC Championship). At least Carroll and Wilson were both accountable and put the blame on themselves.

Either way, it was a thriller until the very end, the perfect ending to last year’s 43-8 bore. But make no mistake, New England had the football gods on their side far more than Denver did last season. Judging both Peyton Manning and Tom Brady based on the statistical performances just isn’t enough without proper context. Someday I’ll be able to describe what exactly I mean in proper detail, but I don’t feel like doing that right now.