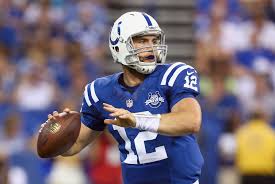 Recently I’ve been studying 2014’s Pro Bowl quarterbacks, and it occurred to me; pretty much every single starter in the NFL has had a game where they’ve thrown multiple interceptions. Even guys like Aaron Rodgers, Tom Brady, and Russell Wilson, normally low volume turnover machines, have done this.

Naturally, I decided to research multi interception games for virtually every proven starter in the NFL, and the results surprised me. So much so that I charted the amount of multi-interception games dating back to 2011, since it’s the perfect sample size for this kind of charting.

This article will take a look at the touchdown-interception ratio, the win-loss record, the win percentage, and the value of the quarterback’s team in said games with multiple picks. I created a formula for the team value in addition, as explained below.

I gathered the QBR totals for all the multi-pick games of each quarterback mentioned in the below chart. Some of the results may surprise you. (NOTE: The minimum requirement to make this list is 10 games with at least 2 interceptions. And yes, this includes the playoffs.) 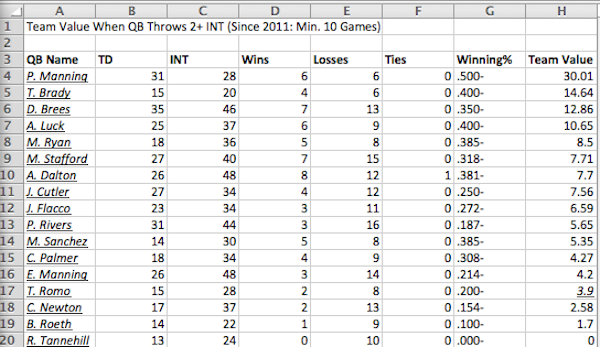 Obviously the data shown here does not mean any QB is better than the next (though Peyton Manning, the only QB since 2011 to throw more touchdowns than interceptions in multi-pick games, ranks on top for a reason), but this interests me anyways. The top 3 choices shouldn’t be a surprise, as these 3 are considered the elites. Peyton had a few stinkers in 2014 which inflate his turnovers in those situations, so his ratio is far more impressive than meets the eye. This is also a list in which he has a higher winning percentage in something than rival Tom Brady.

Guys like Aaron Rodgers, Russell Wilson, and Alex Smith have less than 10 games with 2+ interceptions, hence why they aren’t on here. And we can forget the rookie quarterbacks such as Teddy Bridgewater, Blake Bortles, Derek Carr, and the already forgotten Johnny Manziel.

Andrew Luck at 4th place is pretty impressive considering he just completed his 3rd season in the NFL. What’s even more impressive is that the Falcons won a game in which Matt Ryan threw 0 touchdowns and 5 interceptions (2012, Arizona). Thus, Atlanta’s win-loss ratio is pretty incredible.

The Dalton era Bengals have the most wins out of any team with a franchise quarterback in this situation, which is quite alarming, especially since he’s thrown as many picks as Eli Manning in these situations, yet actually has a higher winning percentage (and the only tie in a game throwing 2 picks). Ryan Tannehill’s Dolphins don’t even have a single win when Tannehill throws at least 2 picks, which says a lot about how poor the surrounding cast has been.

There’s something humorously appropriate about Matthew Stafford, Jay Cutler, and Joe Flacco being stacked next to each other on this list, especially since everyone thinks they belong in the same tier. I am surprised that Mark Sanchez is higher on this list than he should be, but the cast in Philadelphia seems to have given him a boost over the competition, so to speak.

Philip Rivers’ low placement on this list is due to an inflation from 2011-2012, in which he had 12 games with at least 2 picks. Since then, he’s cut it down to 7, and you can validate that his multi-pick games in 2014 were mostly due to injury.

Also, keep in mind that there’s a reason I say “Team Value”, and not “Quarterback value”. If you follow me on Twitter (@KinsleyPFS), you know I loathe the “Quarterback Win” statistic, and there are a few QBs listed here with unfair team value. It’s not solely Ben Roethlisberger, Tony Romo, Cam Newton, or Eli Manning’s faults that “their” records in these situations are terrible. Sometimes the team failed to step up on defense, or the opposing team was so far ahead the QB had no choice but to gunsling the ball downfield. This all depends on the context.

Of course, guys like Peyton, Brady, Brees, and Luck are the core of their respective teams, so the team value reflects them more than, say, a guy like Andy Dalton. Again, just because a QB has a higher *team value* doesn’t mean he’s better in those situations than a QB with a lower team value. This also isn’t meant to stir opinions over which guys are turnover prone, as well as call out the questionable “franchise quarterbacks”.

This is simply something I had fun cooking up, as well as to give people a better look at quarterbacks in games where they throw multi picks. Perhaps in the future I’ll be able to study this even further so that I have a better understanding of these situations.