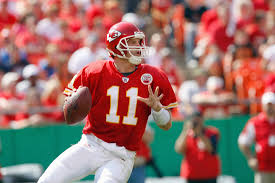 Alex Smith Is NOT A Franchise QB (For Now)

The QB Extension Market has come once again.

The Chiefs extended quarterback Alex Smith to a new 4-year deal worth $68M ($17M per year, $45M guaranteed). Smith will enter his 9th year in the NFL, and will come off a season where he earned his first Pro Bowl appearance.

The answer right now is no.

We know that quarterbacks such as Peyton Manning, Tom Brady, Aaron Rodgers and Drew Brees deserve to be paid franchise QB money because they are asked to do a lot for their teams, and for the most part they have. These four QBs have all lead the NFL in individual statistics such as completion percentage, passing yardage, TD passes, passer rating, and have earned MVP and/or First Team All-Pro honors. Even second-tier QBs such as Ben Roethlisberger, Eli Manning, Tony Romo, Philip Rivers, Joe Flacco and Matt Ryan have all played at levels where they elevated their game.

The same can’t be said for Alex Smith.

But unlike Rodgers and Brady, Smith has never been the kind of guy to carry a team on his shoulder. From 2011-2013, Rodgers and Brady threw 101 and 98 TD passes respectively. Smith only threw 53 TD passes in the last three years. Smith has the fourth-highest TD-INT ratio since 2011, but that’s only because he doesn’t throw as much as Peyton/Brady/Brees/Rodgers. Sustaining that with more attempts and yardage is difficult to accomplish.

But something a bit more surprising lurks beneath us.

Nine of those 13 games were against teams that failed to make the playoffs. Here’s a rundown in case you’re wondering:

Should the Chiefs really be paying top-tier QB money to a guy who can’t even throw one TD against bad teams?

Stick with me, it gets worse.

Even during games where Smith throws multiple TD passes, he doesn’t look very impressive. On December 15th, 2013, Alex threw five TD passes for a 158.3 passer rating. Despite this, NFL site Pro Football Focus (@PFF) graded Alex Smith a -0.3, citing that running back Jamaal Charles, who had five TD that day as well (four receiving, one rushing), did most of the work. It should also be noted that all five TD passes traveled a combined 13 yards in the air.

And via PFF’s Steve Palazzolo, only 26% of Smith’s passes in 2013 traveled beyond the first down marker (lowest in the league). That’s bad.

Some may praise Smith in spite all of this because he wins games, citing him as a “safe QB, not asked to do much, makes minimal mistakes.” How does that make him any different than, say, Trent Dilfer, or Brad Johnson? Those QBs won Super Bowls, yet were notorious for being “game managers.” Alex Smith for most of his career is cast from the same mold.

Give me a great QB on a mediocre team over a safe QB on a great team any day.

Despite this, Alex Smith has managed to play great in the playoffs. In 3 career postseason games, Smith has thrown 9 TD, 0 INT, and has a passer rating of 108.6. He’s coming off a terrific performance against the Indianapolis Colts, where he managed to throw for 378 yards, 4 TD, 0 INT, and a passer rating of 119.7. Safe to say he had the game of his life that day, despite the Chiefs ultimately losing in one of the greatest comebacks in postseason history.

How Smith has failed to replicate that same postseason success in the regular season is a mystery to me.

And while some approve a January hot streak, I argue that it’s better to start that streak in September, as it puts a QB’s team in a much better position to succeed.

The problem is Alex Smith has never been the most dependable quarterback on the field (other than making minimal mistakes). Perhaps this is why many judge him as a quarterback who can only throw check downs and screen passes in systems with top scoring defenses and running games.

This develops another issue. Franchise QB extensions are meant for those who have earned the right to be called one (well, at least they SHOULD be). After one overrated year in Kansas City, is this really enough? The Chiefs were bold to pay Smith prematurely. I would’ve waited until after the 2014 season to pay the 30-year-old QB; it would’ve given him more confidence, inspiration and motivation to get the money he potentially deserved (30+ TD season, 4,000 passing yard season, 65.0 CMP% season, etc.).

Instead, this move could be seen as a potential flop. If Smith plays bad in 2014, the Chiefs could see themselves between a rock and a hard place long term (The drafting of Georgia QB Aaron Murray seems a little more confusing with the extension given to Alex Smith.). While the contract is very team-friendly, is it really worth all the trouble of going through in the first place?

One could argue head coach Andy Reid and Jamaal Charles made Alex Smith look way better than he really was. Smith is nowhere near the level of Peyton, Brady, Brees, or Rodgers, and for the last three years he has been a third rate Tom Brady: gets the wins, but with underwhelming performances

Does that mean Smith can’t be a franchise QB? Of course not.

Andy Reid can potentially raise Smith to his ceiling and get as much out of him as possible, catering to his strengths (minimal turnovers, sharp field awareness) and eliminating his weaknesses.

Smith has shown he has the arm to throw deep balls. Via Sports Illustrated’s Doug Farrar, Smith threw three TD and 0 INT on deep ball throws in 2013. The only problem is he’s rarely used it. If Andy Reid succeeds in enhancing that key area, we could see Smith prove doubters wrong and leave his game manager status behind for good.

After all, Reid got the most out of quarterbacks such as Donovan McNabb in 2004 and Michael Vick in 2010. While McNabb had a very good career, Vick never really experienced the same success he had in 2010 ever again. There’s no guarantee that Smith will end up with the same fate as Vick, but if we see postseason Alex Smith in the regular season, then defenses beware.

It’s not like Smith is a bad QB either. He’s not the worst option the Chiefs have ever had. He’s not a bust like so many other first round draft picks. And he’s the best option Kansas City has right now.

He just might not be the team’s best option in the long run.